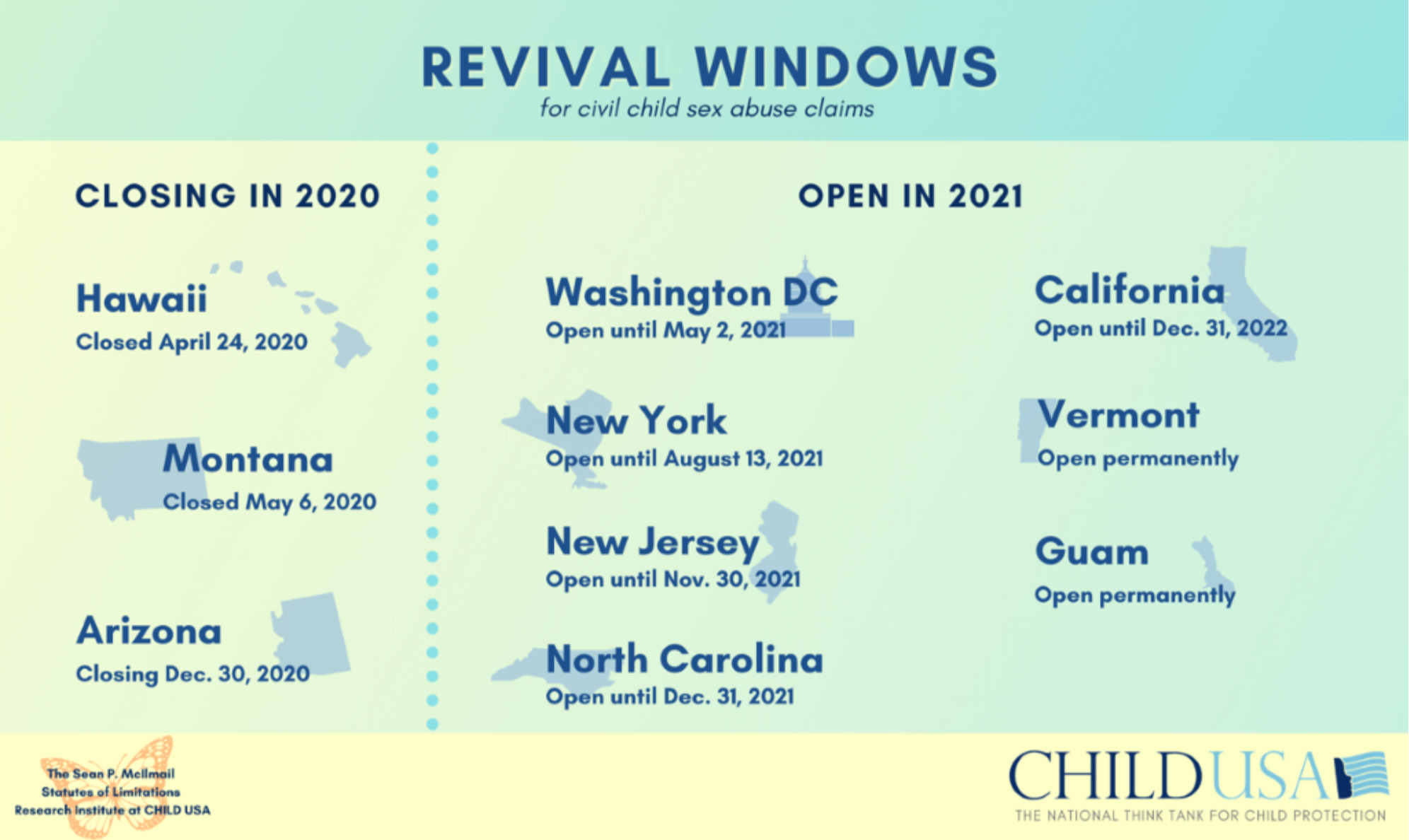 The revival window which gives all survivors of child sex abuse in Arizona more time to file lawsuits for their abuse is closing soon.

Survivors who are currently over age 30 only have until December 30, 2020 to file their previously expired civil claims, and then unfortunately, their claims will go back to being time-barred.

Arizona’s revival window was a huge accomplishment and hard fought by fierce advocates and legislators in the state.  There were weeks of contentious negotiations on a bill to expand the rights of child sex abuse survivors, but Senator Paul Boyer would not compromise and passionately insisted on a revival window. Senators Boyer and Carter both refused to vote on the budget until the Child Protection Act was voted on. In the end, the legislature unanimously approved it, and Governor Doug Ducey signed it into law on May 7, 2019.

Before this new law went into effect, Arizona’s statute of limitations (SOL) ranked amongst the worst for survivors because it was one of the shortest in the United States.

Survivors in Arizona were previously forced to file claims for their abuse by age 20. Revival windows, like Arizona’s, honor and empower the victims of child sex abuse who face locked courthouse doors due to unfairly short SOLs when they are ready to sue.

Under Arizona’s Child Protection Act, all children being abused now will have until they reach age 30 to file a civil suit against an abuser, other individual, entity or the government for intentional and negligent conduct, including failure to report sexual abuse of a minor. For adults under age 30 who were abused as children, their claims are revived, and they have until they reach age 30 to sue. For adults age 30 and older, they can sue only while the revival window is open, until December 30th of this year.

Arizona is on a growing list of 17 states, Washington D.C. and Guam that have at some point opened a revival window for previously time-barred child sex abuse claims. While Arizona’s 19-month window is shorter than the average window, it notably includes liability for perpetrators and any individuals or entities that enabled the abuse. Some entities and predators that have already been identified via the window are the Boy Scouts of America, Corpus Christi and Phoenix Dioceses of the Catholic Church, Brophy College Preparatory in Phoenix, and a Catholic priest with a history of abusing children who was placed in several Arizona schools in Indigenous and rural communities.

At the start of this year, Arizona stood alongside California, Guam, Hawaii, Montana, New York, New Jersey, North Carolina, Vermont and Washington D.C., which all had revival windows open helping survivors of child sex abuse access justice. If you were sexually abused in Arizona or any of these jurisdictions when you were a child, please take a look at our Survivor Toolkits to help you understand your rights and guide you through the empowering but challenging process of filing a civil lawsuit. While Arizona, Hawaii, and Montana’s windows will all be closed by the end of 2020, windows in North Carolina, New York, California and a handful of other states will stay open. We hope that when one window closes another opens, and we are already working closely with advocates and legislators in several states to pass new window laws for survivors in 2021.