CHILD USA tips its hat to attorneys Richard Serbin, of The Law Office of Richard M. Serbin, and Alan Perer, of Swensen & Perer, whose skillful and zealous advocacy on behalf of their client, Renee Rice, could change the landscape of child sexual abuse claims in Pennsylvania. 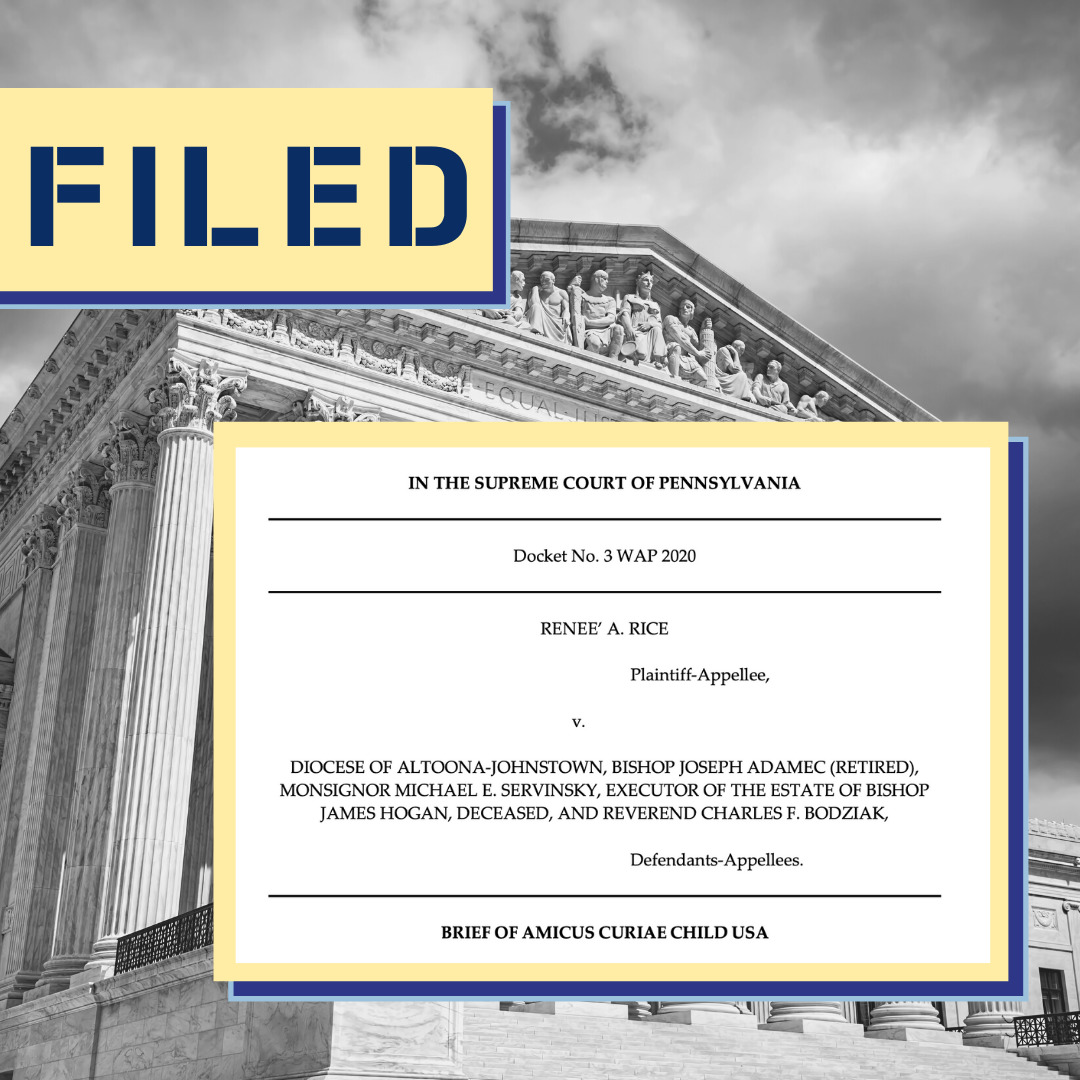 On Tuesday October 20th, the Pennsylvania Supreme Court heard oral arguments on the landmark case Rice v. Diocese of Altoona-Johnstown, et. al, that could allow plaintiffs to sue church employers and other institutions over sexual abuse in cases that had previously been barred by the statute of limitations. CHILD USA in partnership with attorney Chip Becker and Kline & Specter filed an amicus brief in support of survivor Rice arguing that the scientific facts of child sex abuse support the use of the discovery rule in this case.

Renee Rice, who was sexually abused at the hands of a priest in the 1970’s and 80’s, sued the Diocese of Altoona-Johnstown in 2016 after reading the Pennsylvania statewide Grand Jury report that accused the Diocese of intentionally covering up decades of child sexual abuse.  In 2019, the state Superior Court ruled that Ms. Rice could pursue her claim that the Diocese engaged in an alleged pattern of fraud and conspiracy that a jury may conclude unfairly delayed her filing of a claim.

During Tuesday’s oral arguments, which were held virtually and live streamed via YouTube, the Justices narrowed in on the point at which Ms. Rice’s obligation to conduct a reasonable investigation into potential claims was triggered as a matter of law, and whether Ms. Rice waited too long to sue the Diocese of Altoona-Johnstown. Justice Donohue questioned whether national news coverage in the early 2000’s about clergy abuse and efforts by other dioceses to cover up complaints of abuse put Ms. Rice on notice to investigate the possibility of cover-ups taking place within her diocese. Several Justices questioned whether Ms. Rice was obligated to follow up on a 2006 letter sent to her by the Diocese in response her notifying them of the abuse she endured decades earlier. Chief Justice Saylor suggested that Ms. Rice’s obligation to investigate claims against the Diocese, at least on a theory of vicarious liability, arose at the time of the abuse itself. Justice Baer, however, questioned whether Ms. Rice’s knowledge that she was abused, by a priest, and that it occurred on church property is sufficient enough to eliminate a factual controversy, adding that it seemed “almost counterintuitive to think she was on inquiry notice because the priest [committed the abuse] on church property to protect himself from discovery” such that “prior to becoming public notice” there would have been no indication that the church would know anything about the abuse.

The Justices’ diverse recounting of the facts and the evidence signaling the potential for claims to have been discovered prior to the 2016 Grand Jury report, lends further credence to Ms. Rice’s argument that there are competing facts regarding when the period of limitations began to accrue for a jury to resolve. As Attorney Perer reiterated, “We’re not asking the court to rule as a matter of law that she’s within the statute of limitations, we’re only asking for the court to follow precedent,” he said. “The diocese still can win — they can take depositions and say, ‘You knew,’ but let a jury decide the issue.”

Several members of the court suggested that jurors need not weigh in on whether the alleged coverup expanded the timeframe under which Ms. Rice had to sue the Diocese by conflating Ms. Rice’s knowledge of her abuse with her knowledge of the Diocese’s active  concealment and conspiracy to cover up child abuse. The claims, however, are two distinct phenomena—the tortious act of sexual abuse, and the third-party liability by fraud and conspiracy. The sexual abuse may have been immediately ascertainable, whereas there was no reason for Ms. Rice to even suspect that Catholic Church was involved in a decades-long effort to protect and facilitate predatory clergy until the Grand Jury Report was made public and the scandal gained widespread media attention.

Justice Donohue and Chief Justice Saylor echoed concerns that Ms. Rice was effectively seeking a ruling that the statute of limitations can never be a defense as a matter of law. Despite their characterization of plaintiff’s position, Ms. Rice is not seeking any change in the law but rather asks the Court to apply the same discovery rule and fraudulent concealment principles that the Court has applied in every single case that has come before it where factual conflicts regarding statute of limitations arise.

The state’s highest court considers this case against the backdrop of significant national developments regarding statutes of limitation in child sex abuse cases. While the Pennsylvania General Assembly recently extended the statute of limitations to give new victims until age 30 to file a lawsuit, victims of decades old abuse do not have that same opportunity and are forced to rely on the court to open the door for justice.

A decision on this case is not expected for several months but it will inevitably impact similar lawsuits that have been filed against dioceses across the Commonwealth. The Superior Court ruling, if upheld, will give Ms. Rice and countless other victims the opportunity to make their cases before a jury. Yet, many claims will still be at risk of being time-barred where courts fail to appreciate why plaintiffs’ delay recognizing or disclosing childhood sexual abuse. The best way to ensure a path to justice for all victims is through legislation that creates a retroactive window for survivors to bring their claims to court that would otherwise be barred under the traditional statute of limitations. Traditional limitations principles have for too long posed an impossible and inappropriate barrier to legal redress for the harms endured by survivors by their abusers decades ago.