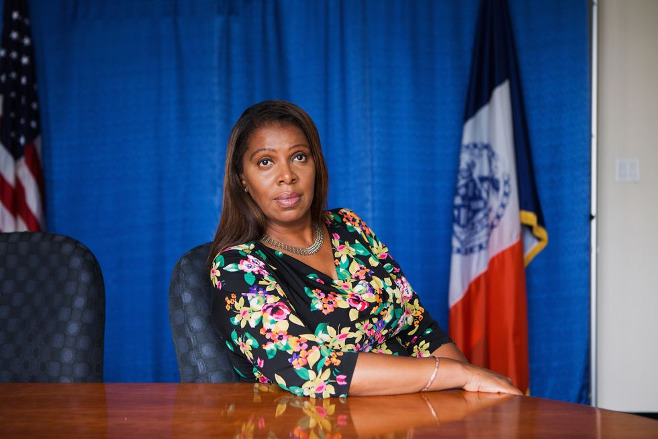 In 2002, the nation was rocked by the Boston Globe’s publication of its bombshell report exposing the intentional coverup of child sexual abuse in the Archdiocese of Boston.  Our country was forced to reckon with the Catholic Church’s contribution to the national child sex abuse crisis that affects 1 in 5 girls and 1 in 13 boys.  To be sure, it is not the only religious or secular organization to engage in this behavior, but it is one of the largest.

Since 2002, Attorneys General in 21 states and the District of Columbia have launched investigations into Catholic clergy sex abuse, to varying degrees of success.  In late November, the Attorney General (AG) of New York, Letitia James, filed a complaint against the Diocese of Buffalo that upped the ante on how far states can go to hold clergy accountable for abuse.

The 22 jurisdictions that are in the process of conducting or that have already conducted official investigations of Catholic sex abuse in their states are California, Colorado, Delaware, Florida, Georgia, Illinois, Indiana, Iowa, Kansas, Maryland, Massachusetts, Michigan, Missouri, New Jersey, New Mexico, New York, Pennsylvania, Rhode Island, Vermont, Virginia, Washington, D.C., and West Virginia.  The results so far are on a spectrum, and some of these states have had recent success identifying and charging perpetrators:

The Michigan AG Dana Nessel clergy probe identified 454 priests who have been credibly accused of child sexual abuse. A Michigan court recently denied two of the accused priests’ requests to disregard a recording of their confessions as evidence in their cases.

In 2018, AG Josh Shapiro called out the Pennsylvania Catholic Conference for lobbying against SOL reform, while encouraging lawmakers to abolish the criminal statute of limitations and pass a bill that would allow survivors two years to bring civil claims of child sexual abuse.  AG Shapiro observed “it has come down to an institution trying to protect its own interests above the people that they are supposed to serve.”

In March 2019, in an unprecedented move, West Virginia AG Patrick Morrisey announced a civil action against the Diocese of Wheeling-Charleston for violating consumer protection laws by falsely reporting that its Catholic schools were safe places for children.  Unfortunately, the West Virginia Supreme Court, citing religious freedom concerns, held that religious institutions cannot be sued under the 2015 Consumer Credit and Protection Act.

Until now, there have been only a few indictments in each state, with a lack of true, successful institutional accountability, in part because so few AGs have been able to access the information they need to see the true pattern of abuse across their whole state.

We celebrate the work of state Attorneys General to uncover clergy abuse in their states.  We especially commend the New York AG James’ investigative approach, and resultant innovative Complaint against the Diocese of Buffalo, that looks beyond individual perpetrators to institutional accountability.  On November 23rd, AG Letitia James sued the Diocese of Buffalo and two former church leaders, Bishop Malone and Auxiliary Bishop Grosz, citing their failure to perform their fiduciary duties and to protect the public under a series of laws applicable to New York charitable organizations.

In its 218-page Complaint, the State details the Diocese’s flagrant disregard of sexual abuse allegations, and its contribution to a pattern of sheltering credibly accused abusers from the Church’s investigation and from the public eye.

Despite their public support of these standards, the Complaint alleges that the Diocese largely failed to conduct even basic investigations into allegations of abuse.  Instead, the Diocese labeled the accused as “unassignable” and let them remain incardinated or retire early.  This means priests who abused children were financially supported, sometimes for decades, by the Diocese.  The State argues that the Diocese misused their charitable assets by financially supporting credibly accused child sexual abusers.

The State also detailed various ways the Diocese failed to document and communicate allegations of abuse to higher church leadership.  After an entire year of conducting discovery, the Diocese has failed to share files for about half of the priests who they publicly announced have been credibly accused of abuse.  Even more, the Diocese has seriously misled the public by expressing that they are closely investigating and monitoring accused priests when they are not doing so.

What AG James seeks in response to the Diocese of Buffalo’s failure to act is clear: first, she asks for true, independent review of the response to alleged sex abuse in the Diocese.  She also asks that the Diocese be required to share a full report of alleged abuse and investigations for 5 years, and finally that the Diocese have external oversight of
an appropriate “remedial and compliance plan.”  She wants to hold Bishop Malone and Auxiliary Bishop Grosz individually responsible for violating their duties as fiduciaries of a charitable organization and for the funds they misused while fiduciaries of a charitable organization.

Simply put, AG James is asking for the Diocese to abide by the standards it agreed to in 2002.  AG James stands with many others in New York to hold perpetrators of abuse and those who allow the abuse to continue accountable.

There Is More Work to Do

While some state Attorneys General are making efforts to root out child sexual abuse in religious institutions, their work can only go so far.  Unfairly short statutes of limitations (SOLs) are still keeping clergy and other abusers from being held accountable in a number of states.

Even after conducting a full investigation into clergy abuse in Florida and identifying nearly 100 priests accused of abuse, AG Ashley Moody announced that she could not charge any of the accused priests, because the SOLs had run on their crimes and it is unconstitutional to revive criminal SOLs.

The work of statute of limitations reform remains crucial for accountability. It is critical for attorneys general to use their authority to root out institutional abuse by investigating and backing SOL reform, particularly window legislation when they find child sex abuse but no avenue for justice.  CHILD USA commends AG James for her creative work to hold the Diocese of Buffalo accountable and to protect future children from abuse in Church-related activities.  We encourage other states to follow her lead. 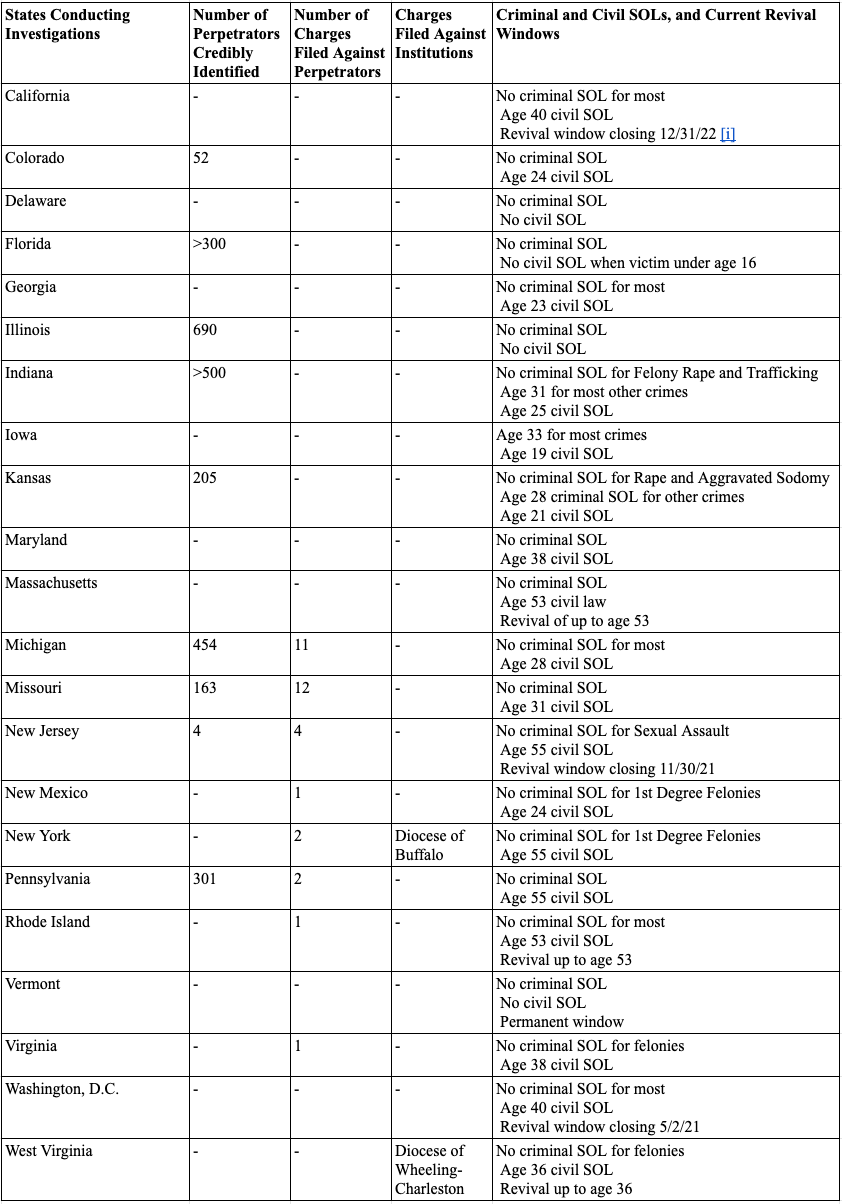 [1] For more detailed information on statutes of limitations in your state, like California, visit https://childusa.org/law/california/.