By Bridget Brainard, Staff Attorney at CHILD USA. Bridget is a Staff Attorney at CHILD USA. In addition to conducting legal research and policy analysis in the areas of child sexual abuse, human trafficking, trauma-informed judicial training, abuse in youth sports, and educational neglect, Bridget leads CHILD USA’s bankruptcy reform initiative, fighting for federal reform to Chapter 11 of the U.S. Bankruptcy Code in cases of child sexual abuse. Bridget is a 2017 graduate of Penn State University’s Dickinson School of Law. Prior to joining CHILD USA, she was a Deputy Attorney General in the Juvenile Delinquency Unit of the Delaware Department of Justice where she prosecuted juvenile criminal cases in Family Court. She also served as a judicial law clerk for the Chief Judge of Delaware’s Family Court.

This legislation requires the FBI to use multidisciplinary teams, comprised of mental health professionals, medical personnel, child advocacy center personnel, prosecutors, and others when investigating cases of child sexual abuse, child sexual abuse material, and trafficking. Investigations would be regularly reviewed by the team to share information about the case, address any investigative or prosecutorial barriers, and ensure victims receive the support and treatment they need. Read our one-pager that shows why we supported the bill here.

CHILD USA’s Game Over Commission to Protect Youth Athletes highlighted this very issue in the first independent investigation and report on the institutional failures to protect athletes from Larry Nassar. The Game Over Commission’s final Report made detailed recommendations to Congress, state and federal law enforcement, insurers, state and federal governments, sports organizations, and state medical licensing boards to take immediate action, with one recommendation being the use of multidisciplinary teams in FBI investigations involving child sexual abuse.

The Respect for Child Survivors Act is an enormous step forward to protect athletes from abuse. But our work is not finished. Additional recommendations for Congress include:

You can read the Game Over Commission Report here, including our full list of recommendations to prevent abuse in athletics on pages 51-52.

CHILD USA thanks the bill sponsors, Senators Cornyn, Coons, Graham, and Klobuchar, for their leadership in passing this critical legislation that will encourage effective child sexual abuse investigations that bring justice to survivors and accountability to wrongdoers, as well ensure the protection of victims during these often retraumatizing investigations.

We look forward to continuing our work with Congressional leaders to protect youth athletes from abuse. Stay tuned for phase two of the Game Over Commission that will focus on elite athletes coming in 2023!

END_OF_DOCUMENT_TOKEN_TO_BE_REPLACED 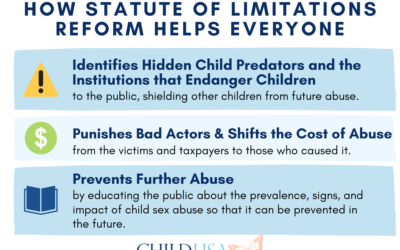 Statutes of Limitation: What They Are and Why They Matter to CHILD USA

At CHILD USA, we fight for the rights of children to be free from child sex abuse (“CSA”) through legal reforms that hold individuals and institutions accountable.