Statutes of Limitation: What They Are and Why They Matter to CHILD USA
December 14, 2022
Written by Carina Nixon

By Carina Nixon, Staff Attorney at CHILD USA. Prior to CHILD USA, Carina worked as an Attorney-Advisor for the Small Business Administration’s Office of Disaster Assistance where she aided small business owners in recovering from the COVID-19 pandemic.  Previously, she worked as an Attorney-Advisor in the General Counsel’s Office of the National Endowment for the Humanities in Washington, D.C. As a mother herself, she is passionate about ensuring every child is afforded the legal protections and human rights they deserve.

At CHILD USA, we fight for the rights of children to be free from child sex abuse (“CSA”) through legal reforms that hold individuals and institutions accountable. One way we do this is by leading the national and global statute of limitations (“SOL”) reform movement to (1) eliminate civil and criminal SOLs for child sex abuse crimes, and (2) to revive civil child sex abuse claims that were unfairly blocked by short SOLs. SOL reform is CHILD USA’s signature systemic solution to the preventable child sexual abuse epidemic.

An SOL is a legal deadline for pressing criminal charges or for filing a civil lawsuit.  In general, SOLs dictate how young a survivor must be to pursue justice. States and the federal government enact and amend varying SOLs through legislation, and as a result, SOLs are different federally and in each state.

What’s the difference between a criminal and civil SOL?

Criminal cases can result in prison sentences, financial restitution, and/or placement on a state sex offender registry. Crimes are considered offenses against the state and criminal SOLs give the government a deadline for prosecuting crimes.  For example, in Iowa, there is no SOL for any CSA crimes, which means the government can prosecute an accused abuser no matter how much time has passed since they committed the CSA.  In Oregon, on the other hand, the SOL for certain CSA crimes is age 30, which means the government must file charges against an alleged perpetrator before the survivor reaches age 30.

Importantly, the United States Supreme Court decided that criminal SOLs cannot be revived.[i]  In other words, once the deadline has passed to prosecute a criminal CSA offense, legislators cannot pass a law that brings that case back to life so it can be prosecuted. CHILD USA believes there should never be a time limit on when the government can prosecute CSA crimes if it has sufficient evidence to file charges against a perpetrator.

Civil cases result in monetary damages awards, which help survivors bear the financial costs of their abuse. Civil SOLs give survivors of child sex abuse a deadline for filing a civil lawsuit. For example, there is no civil SOL for federal CSA claims, which means survivors can sue their abusers in federal court at any time.  In Ohio, however, a CSA survivor only has until age 30 to file a lawsuit in state court.  CHILD USA believes CSA survivors should be permitted to file civil claims for their injuries whenever they are ready and no matter how long ago they were abused.  Unlike criminal SOLs, civil SOL can be revived.

Why do SOLs matter so much?

SOLs tell CSA survivors whether their abusers can be criminally and/or civilly prosecuted in a court of law.  In states that have short SOLs, many survivors miss their opportunity to hold their abusers accountable.  This is usually because the trauma of CSA prevented them from disclosing their abuse and beginning the personally and emotionally grueling legal process before the SOL on their claim expired.  Because many SOLs cut off claims before survivors are ready to come forward, abusers remain free to prey on more children.  At CHILD, we believe this is unacceptable.

Why do we focus on SOL reform?

To effectively protect children from abuse, SOL laws must reflect the reality of CSA trauma and delayed disclosure.  By reforming SOLs, we can give survivors a real opportunity to pursue justice and healing for their injuries when they are ready. When survivors are empowered to disclose their abuse, the public benefits in many ways.  The graphic below illustrates three especially compelling public purposes: 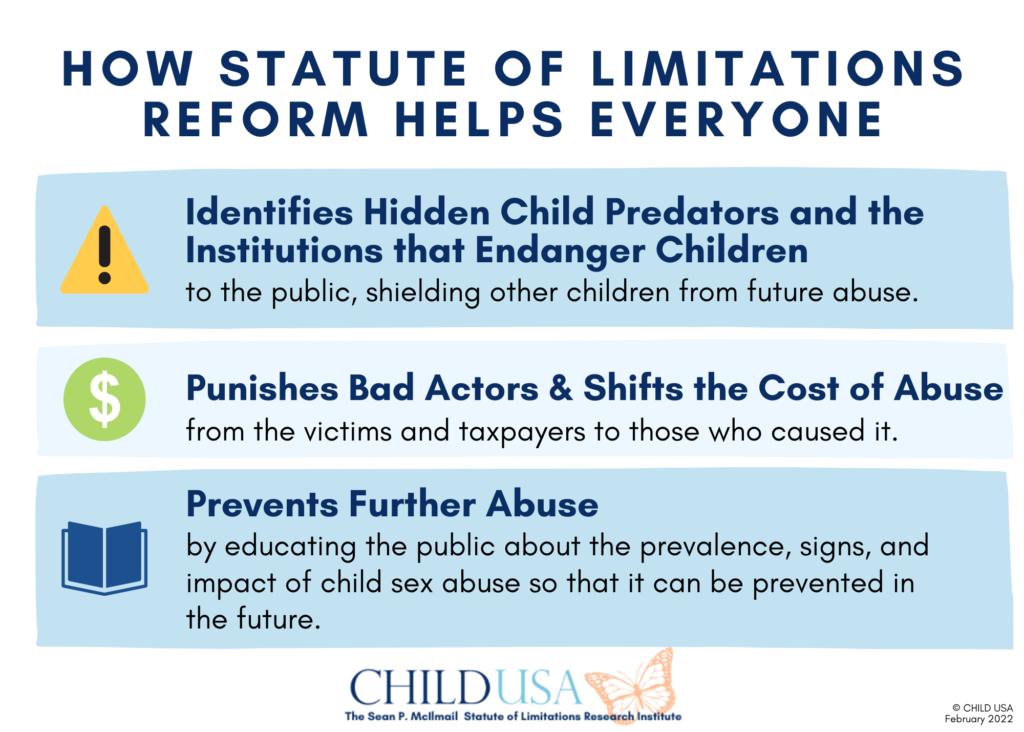 While SOLs vary from state to state, many share a few common features: age limits, discovery rules, and revival windows.

Some states use age to set the legal deadline on claims. For example, in Pennsylvania, the civil SOL for CSA is:

So, a survivor of CSA in Pennsylvania must file their civil claim before they reach age 55.  If they do not, their claim is expired, and they can no longer sue their abuser.

Other states base their SOLs on when the survivor makes a “discovery” in connection with their CSA. However, states do not all agree on when a “discovery” happens.  In general, there are two definitions of discovery that states follow.

A minority of states define discovery as when the survivor first realizes they were in fact abused.  SOLs like this only pause the clock for survivors who were unconscious during their abuse or immediately repressed memories of the abuse. For example, in North Dakota, the civil SOL for CSA claims is age 19 or:

“ten years after the plaintiff knew or reasonably should have known that a potential claim exists resulting from the alleged childhood sexual abuse.”[iii]

So, in North Dakota, if a 22-year-old recovers repressed memories of abuse while in therapy, they have 10 years to file a civil claim against their abuser, despite being older than North Dakota’s age limit deadline of 19.

The majority of states use a more generous definition of “discovery.” They say a discovery happens when a survivor first understands that an injury is connected to their sexual abuse. These can be physical or psychological injuries stemming from the abuse, such as a depression, addiction, or Post-Traumatic Stress Disorder. Georgia uses this version of the discovery rule in its civil CSA SOL, which is before age 23 or:

“within two years from the date the plaintiff knew or had reason to know of such abuse and that such abuse resulted in injury to the plaintiff as established by competent medical or psychological evidence.”[iv]

This means that in Georgia, if a 25-year-old struggling with addiction to alcohol realizes their alcoholism is a result of the traumatic sex abuse they suffered as a child, they have two years from making that realization to file their claim in court, even though they are past the age deadline of 23. These discovery rules tend to be more helpful because they pause the deadline for survivors who, even though they knew they were abused early in life, did not fully comprehend the effects of their abuse until later in life.

Some states have passed SOL legislation that allows survivors to file expired civil claims during a certain “window” of time.  The revival windows that help survivors most are those that stay permanently open, and the next best are those that are open for at least two years.

Vermont, which changed its civil CSA SOL in 2019, uses a permanent window that permits survivors to file claims:

“at any time after the alleged act,” and applies “retroactively to childhood sexual abuse . . . irrespective of any statute of limitations in effect at the time the abuse occurred.”[v]

Simply put, in Vermont, all survivors—regardless of their age, when they discovered their abuse or injury, and even if their claim expired under a prior version of Vermont’s law—can now file civil claims against their abusers.

A window with a time limit looks like Arkansas’s, which says:

In other words, survivors of CSA in Arkansas have from February 1, 2021 until January 31, 2024 to file their civil claims, even if their claims were expired under a prior version of Arkansas law.

What is the goal of CSA SOL reform?

Ultimately, CHILD USA works to ensure a future where all CSA survivors can hold their abusers, and the institutions that enabled their abusers, publicly accountable in a court of law. This would require:

We invite you to join us reaching this important goal to protect our nation’s children.